To the ancient Vikings heaven was Valhalla, a cold, grim, rock hard place. If you died a hero’s death, the Valkyrie, daughters of the gods, would sweep down and collect your soul. Once in Valhalla you would fight and kill, hack and die all day, every day. Rising up to drink strong ale, feast on the best of food and whore all night, only to do it all over again the next day, and so on. . . . .forever.

I wait all year to fight in the Pennsic war. An annual war held by the Society for Creative Anachronism, each August, in Pennsylvania. For in these few moments, marching in column onto the battlefield, swaggering in my shining armor, at the head of my unit - the IronWolf. Stepping in time, to the beat of many drums, my heart is lifted by the sounds of the bagpipes. I know I am alive, I smell the oiled leather and the polished armor, the sweat and fear of the men and women around me. All of who are my sister-daughters and my brother-sons. Eighty-five fighters that have trained all year for this day follow me singing dark songs of war. On the front line we look across the field at the enemies numbers.

This sight fills me with awe and dread. Here I stand in my Valhalla. I will fight and kill, hack and slay falling before my enemies - only to rise and party all night.

Beneath an iron gray sky the battlefield silently awaits the violence to come. The king of the Midrealm inspecting his troops stops in front of me. “Good day, Sir Osric, I hope your IronWolf is hungry”. I step forward, “Your majesty, we will eat what is put before us.” “Good hunting IronWolf,” the king says to the unit. They silently nod, all business with eyes full of grim determination. The marshalls and noncombatants nervously start to leave the field.

As I look north, there is a bitter reminder of the real and dangerous game we play. Five ambulances parked all in a line waiting. Their drivers knowing what will follow. My hands are sweating in my gauntlets as time slows down to a crawl. No one stands in between the two eager armies. Silence falls like a blanket over the unit. The two armies stand deathly still. I look to my right and then to my left. The Midrealm army is over half a mile long standing shoulder to shoulder fifteen men deep. To the Eastern army we hopefully look massive. We field some four thousand warriors. The East has over five thousand men.

No one said war is fair.

Finally the silence is shattered as the cannon roars its defiance. Both armies move as one. Banners flying in a splash of colors, snapping in the breeze. I feel that I am made of lead and my feet are great stones. I scream my battle cry, “Burn in Hell!” but cannot hear my own voice. The greater voice of the mob washes over me, its roar is deafening. As I charge I cannot feel my feet touch the ground as the earth shakes beneath the many shifting feet of the army. The foe slowly grows closer. Moving in what feels to be slow motion, I can now see their eyes, hear their cries and then time speeds up. Five times faster than normal, as the fierce front line of each army crashes into each other. With a sound louder than thunder, shields smash together. Flashing swords, axes, long spears and wicked pikes, chop, hack and jab. Men and women start to fall and are tread under foot. I swing my sword, over and over, feeling the blows land hard. Delivering pain and death. On both sides of me there is the black and white of my unit smashing and driving into the wall of the Eastern army, wild howls rising from the pack. We are truly wolves among sheep. The group we face breaks and turns to flee. Death runs them down like dogs.

Iron Wolf turns as one, on my command and we slam into the flank of a greater unit in red and black. This is the candy store. Before they know what has happened they are smashed and scattered. I quickly look over my unit. I have lost almost twenty warriors, but the IronWolf banner still flies. We find a new target, form up, lock shields and than before we charge we are hit in the flank and are strung out badly by a unit of much greater size in blue and gold. I scream orders but cannot hear my own voice. The IronWolf, all veterans, lock shields and start their work. The blood rage sweeps over me and all I see is red. Truly now the Gods of War fill the flesh I wear. I am untouchable and unstoppable. I slam into the line of the foe growling, more animal than man. All that stand before me falls screaming. One, two, six, ten foes fall but suddenly I am more of a threat than the rest of the unit and the foe turns on me. I am struck in the right arm. Pain shoots up to my shoulder. Over and over the blows fall. I block two shots and am struck hard in the leg, the head and back. As I fall a spear slams into my face, snapping my head back like a trip hammer. I crash to the hard ground. Defeated I lay tread under foot, hiding beneath my shield.

IronWolf regroups and avenges my fall. Inspired by my charge they devour the blue and gold unit. As IronWolf leaves me to rejoin the fight the last thing I see is our banner still flying proud, Dubricous, my squire, now in command. With the coppery taste of blood in my mouth and pain screaming through me, not wanting to move. I close my eyes and secretly wait for the Valkyrie to come for me. . . maybe next year...Until tommorow. 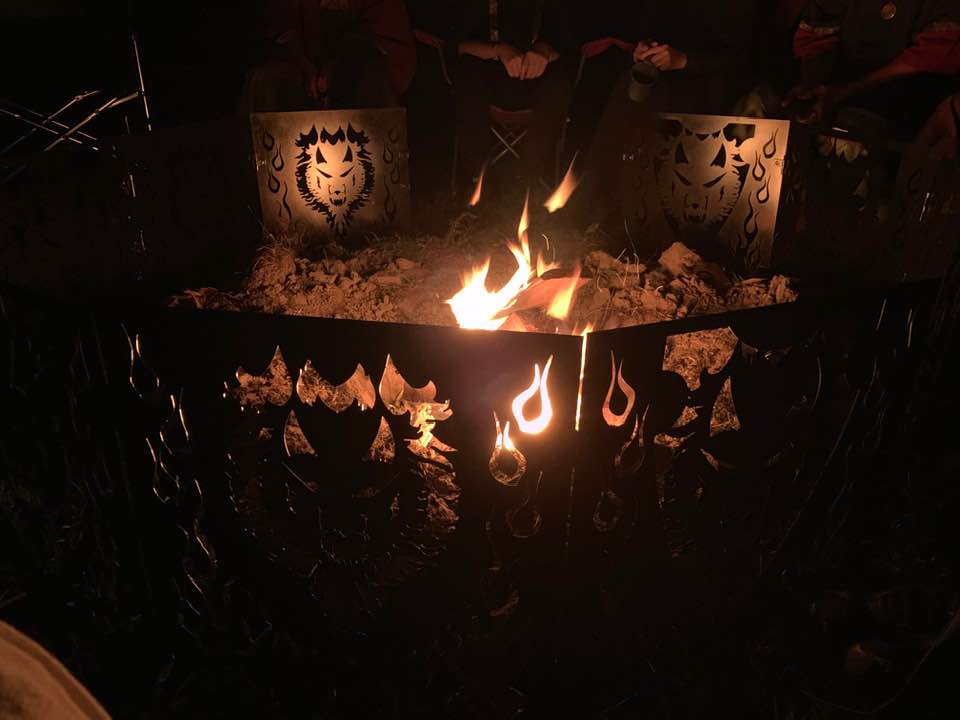