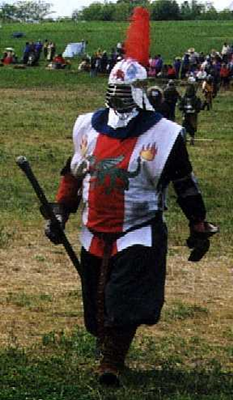 Steve was born on K.I. Sawyer Air Force Base in Marquette County, Michigan, to Sharon and Cary Counselman. He spent most of his childhood in the Upper Peninsula, and graduated high school in Ishpeming. Sports (particularly hockey and football), drama, and a love of learning were cultivated in school, and he never lost his enthusiasm for these areas. After graduation, Steve attended the University of Michigan in Ann Arbor. He was a sales manager at Staples, and had recently stepped down and restarted his education with the goal of becoming a native rights advocacy lawyer.

While in college Steve joined the Society for Creative Anachronism, an historic re-creation organization, and his enjoyment of this hobby stayed an active part of his life. In the SCA he was known as Cormac MacEoghain, where he achieved recognition for his martial arts skills and service. Cormac was taken as squire by Sir Wolfgang von GoldnHerz, and later by Sir Osric Eisenwulf, and also developed a household in the SCA, Clan MacEoghain. For many years now his leadership and combat skills have been recognized as he was given command of ever increasing troops in the Society's various war games. His love of life and chivalry was apparent to everyone he touched in this widespread game.

Steve's Cherokee heritage was a source of great pride, and he took an active interest in Native American spirituality an history. In 2001, he joined the Brotherhood of Freemasons and joined the Brighton Masonic Lodge. His other interests were many and varied. His bookshelves are filled with texts on science fiction, history, fantasy, Native American studies, psychology, drama, philosophy, and much, much more. His library is filled with Native American artifacts, medieval weapons and artifacts, electronic gadgets, games of all sorts, his baseball cap collection, his NHL zamboni collection, and so much more.

On August 30, 1996, Steve married RoseAnn Miller in Lansing, Michigan after years of passing acquaintance. They took a belated honeymoon to Hawaii in 2000, where they watched whales at play, something Steve always wanted to do again. They have lived their marriage vows truly by loving honoring and cherishing each other in sickness and in health, through richer and poorer, forsaking all others till death and beyond.

Steve is survived by his grandmother Marion Niemi, his mother Sharon, his brother Darron, half-brother Jason, half sister Niki, and his beloved wife RoseAnn.